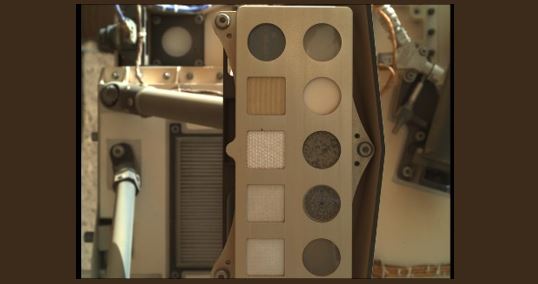 Jezero Crater, Mars, February 18, 2021 – Today, when the NASA rover Perseverance successfully landed on Mars, it signaled a new phase of exploration for NASA. And for Engi-Mat, it will provide an unprecedented opportunity for the company’s capabilities to be demonstrated on another planet.

Prior to the launch of the rover in July of 2020, Engi-Mat had performed research for NASA based on the company’s demonstrated capabilities to produce surfaces with superhydrophobic properties. Subsequently, Engi-Mat provided coated Teflon materials which are now affixed to the exterior of the rover “Perseverance”. These materials will be observed during the rover’s activities on Mars to determine their ability to withstand the extreme challenges of the Martian environment.

The materials from Engi-Mat are being considered for future application as the outer layer of the thermal micrometeoroid garments (TMG), or “spacesuits”, worn by astronauts. Based on previous manned missions to the moon, there are significant concerns about dust from the surface of the moon or Mars being carried into the landing module or astronaut habitat, where it can negatively impact a variety of systems. An outer surface material that eliminates the unintended transport of dust on the TMG would address this problem.

Update on April 23, 2021: The photograph from the Mars Perseverance rover shows the Engi-Mat fabric in the bottom left position. The image was captured by the SHERLOC WATSON camera, which is located on the end of the rover’s robotic arm.